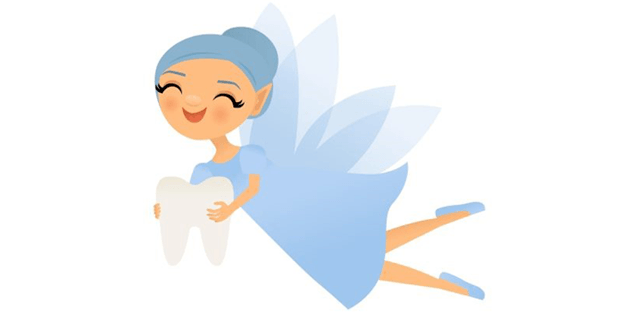 Losing their baby teeth and being paid a visit from the Tooth Fairy has always been a very big deal to kids.  As a pediatric dental office, we experience the excitement of losing teeth with our patients on a regular basis.  Seeing as though we are immersed in all things related to kids’ teeth, who better to delve into the mystery of the Tooth Fairy than the experts in children’s teeth at Pediatric Dental Associates of Randolph.   So, we took on this very important challenge and reached out to area parents with a survey on social media to see how the mystical flying princess of tooth procurement is welcomed by families throughout the area.

So how do kids learn about the Tooth Fairy anyway?

What we found out is that most kids learn about it through discussions with their parents or from older siblings, friends or relatives over the years leading up to their first lost tooth.  Our apologies to children’s book authors, but

As a patron of the winged princess of lost teeth, we were relieved to learn from each and every parent, that all of their children were quite familiar with this fantastical flying fairy.

Where do they keep these castoff teeth, and more importantly, what are they saving them for?  That is a question for another time.

Does the Tooth Fairy always remember to show up?

That was especially significant to this author as her own children have been stood up by the Tooth Fairy on more than one occasion.  After all, when too many children all lose teeth on the very same day the Tooth Fairy can be delayed, just like an Amazon package at holiday time.  Right?

How and where is the tooth left for the Tooth Fairy?

While the concept of the Tooth Fairy is fairly simple.  A child loses his or her tooth and places it under their pillow for the Tooth Fairy to exchange it for something much more exciting.  We found that nearly everyone who responded has a slightly different way of leaving the baby tooth under the pillow.

Now that you’ve all gotten this far into the summary of our survey responses, you will be rewarded with the results you’ve really been searching for: guidance on Tooth Fairy payouts.  This is by far the most important and anticipated result.  No Tooth Fairy wants to shortchange their disciples, nor do they want to overpay for a discarded bicuspid.  After all, kids will lose 20 baby teeth before they are done and that has the potential to get very expensive.

Above all, what we learned in our research is that in celebrating the milestone of childhood lost teeth, the Tooth Fairy is alive and well in New Jersey.  She is a joyful symbol of the innocence of childhood.  Payouts, notes, saved teeth or not, parents hold tight this right of passage for their children and at Pediatric Dental Associates of Randolph we honor and celebrate the Tooth Fairy for her partnership with us in caring for children’s teeth.